The coming of Christianity to East Lothian

In the middle of the 7th century AD, a monk named Aidan was sent out by St Columba's monastery on Iona to bolster up a flagging mission to Northumbria. (The ancient kingdom of Northumbria extended at that time all the way from the River Humber to the Firth of Forth, including all of modern Yorkshire, Durham, Cleveland, Tyne and Wear, Northumberland, Scottish Borders and the Lothians.) Aidan was made a bishop and established his headquarters on the island of Lindisfarne. With Aidan's influence, Christianity became the official religion of Northumbria under King Oswald and his successor Oswin.

Following Aidan, the name that emerge in Scotland is Cuthbert. Cuthbert was a shepherd turned monk and evangelist, ministering to the people across a wide tract of southern Scotland, from Berwickshire to Galloway. Cuthbert eventually became a bishop at the end of the 7th century in the see established by Aidan. Cuthbert's name is commemorated in many church dedications. St Cuthbert's church in Edinburgh is named after him, as is the town of Kircudbright in Galloway.

North Berwick appears to have originated as the southern port of a ferry crossing from East Lothian to Earlsferry in Fife. This route was used by pilgrims travelling to and from St Andrews. The departure point of this ferry may have been either the present location of North Berwick harbour or a point a few miles west at Broad Sands.

The promontary where North Berwick harbour is now was once a separate island, accessible on foot at low tide by a causeway from the burgh. It was vulnerable to storms and high seas, and was further exposed by quarrying of the red leek stone to the east of the island.

It was on this island that the first St Andrew's Church was built. The first explicit historical reference to it is in 1177. The  remains of the first stone church, possibly built on the site of an earlier wooden church can still be seen immediately east of the harbour, where the promenade along Melbourne Road begins. The original church was quite small, consisting of just a nave and chancel. The 12th century simple rectangular church was enlarged by a northern chapel in the 13th century. The tower was built in the 14th century; aisles to the north and south were added in the 15th century and the surviving porch built in the 16th century.

In 1199 the parish church and nearby hospital were given to the nunnery by the Earl of Fife. The nunnery becoming responsible for the maintenance of priest. Relics of St Andrew taken by Bishop Acca from Hexham to St Andrews in 731.

The Medieval Period saw many thousands of pilgrims passing through North Berwick and crossing the Forth to Earlsferry, only declining in the 16th century. Following the Reformation the Rude Altar and the altars dedicated to the Virgin Mary, St Sebastian, St Ninian, were removed, and the kirk remained to serve the burgh and parish under the reformed church.

In 1590 the kirk was the scene of desecration by witches and warlocks who encouraged by the "devil" sought to raise up a storm to prevent King lames VI returning from Denmark with his bride.

The island on which the church stood was larger than we see today, and, in particular extended much further east than it does now. Erosion had occurred progressively over many years, probably partly due to the quarrying away of a dyke of volcanic rock known as red leek stone for use as oven lining material. In 1649 a presbytery visitation records that “the fabric of the kirk is nothing found defective". However by 1652, disastrous erosion set in, resulting in the loss of the Church and the bridge linking the harbour island to the mainland, and leading to the building being abandoned, while the heritors decided whether to repair it or build a new kirk. The tower long outlived the church. It was only demolished in the early 19th century, having been retained as an aid to navigation.

Recently Neil Dougall gave a children's address about the original church, and a video of the address can be seen here:

From 1652 until the second church was opened in 1664 services were held in the 'Great Tenement' belonging to Sir William Dick of Braid's heirs. This building stood in the east side of the Trongait, now Quality Street. 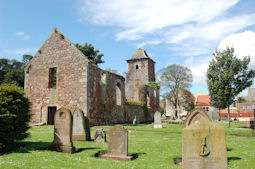 After the collapse of the first St Andrew's Church, a new site was sought. The site eventually chosen was just outside the town, immediately south of the High Street, in the street now known as Kirk Ports. The new church was first opened for worship in 1664. The new graveyard surrounding it also came into use then, although some burials still took place in the old graveyard at the harbour.

It was typical of the immediately post-reformation period, with a single hall-like volume for worship. The focus was on preaching, so the pulpit was located mid-way along one long side. The interior was furnished with box pews, then a new innovation. There were also galleries ('lofts') for private seating space for the major landed families of the parish. Various outshots from the main building housed vestry, session-house and stairways. A tower was built on the western end, in which was hung a bell taken from the first Church.

The bulk of this church still stands as a ruin, surrounded by its kirkyard, in Kirk Ports, which was constructed at the same time. The tower, still has its unusual bell-like slated roof, but although it must once have been a major landmark, it is now somewhat dwarfed by the 19th and 20th Century buildings of the town centre. Unfortunately, a recent inspection has revealed considerable decay, and the tower is now in need of urgent conservation and restoration.

A working group of the North Berwick Community Council has produced a report which describes the work needed to interpret and restore the Kirk. This report can be found by clicking here.

This church served as the town's only church until 1843, when the Free Church of Scotland seceded from the Church of Scotland over the issue of the appointment of parish ministers by the system of Patronage. Shortly after that, a subscription was raised and a new building constructed at the junction of Forth Street and Shore Street (now Victoria Road). The new church was named Blackadder Church after John Blackadder and is now used by the North Berwick Baptist Church. 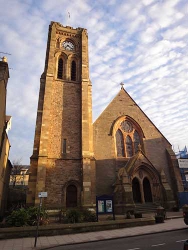 By the late 1870's, there were five church buildings in North Berwick (St Andrew's and the Free, United Presbyterian, Episcopal and Catholic churches) of which the least well appointed was St Andrew's, by then over 200 years old and becoming rather cramped in addition to being dark and damp.

The kirkyard was spacious, so plans were put forward for enlarging the existing building. As this would necessarily involve disturbing the graves in the kirkyard, it provoked a storm of protest. The former Manse site in the High Street was used instead. The foundation stone was laid in 1882 and the new chuch complete by June 1883. The building is in a sort of stripped-down gothic-revival style, designed by the architect Sir Rowand Anderson of Edinburgh. As originally built, the church lacked the hall and tower it has today. These were added in 1901 and 1907 respectively.

The church has a traditional cross-shaped plan, possibly reflecting the personal interests of the Minister of the day, Rev George Washington Sprott, who was much influenced by the liturgical movement then gaining strength with in the church and was a founder member of the Church Service Society. The body of the kirk was furnished with traditional pews all facing forwards. There was a gallery running round three sides of this volume, again with pews. The Chancel was raised up about two feet from the main floor level and contained the organ, communion table and a very tall pulpit. Almost the windows in the sanctuary are glazed with stained glass, some of it of excellent quality. Rather unusually, all the side windows at gallery level are circular.

There was an assortment of small rooms beside and behind the Chancel and a hall which is on a level with St Andrew's street, which forms the southern boundary of the church site.

The tower was originally furnished with the bell cast for the Church in 1642, which subsequently hung in the tower of the second St Andrew's Church. This bell developed a crack and was replaced in 1928. The 1642 bell is still to be seen on display inside the Church at the foot of the tower.

In 1999, the Kirk Session decided that the present building was unsuited to modern day requirements and, with the support of the Congregation, initiated a major improvement and extension of the premises.

This gave rise to the New Century Challenge – a programme of extensive redevelopment which was completed in December 2000. The cost of these major improvements has been met wholly from the congregation, with a loan from central church funds.

The floor of the Church was raised to the level of the original galleries, and an extensive suite of meeting rooms and a chapel built on the original ground floor. The chapel is also used as a meeting room for larger gatherings where the Sanctuary would not be appropriate. The sanctuary itself has retained the gallery pews, but the body of the kirk is now furnished with chairs which can be moved to give a more flexible use of the space. In addition to church services, the sanctuary is often used for concerts and is an important venue for the successful Fringe by the Sea series of concerts in the summer.

No, nothing whatever to do with Rowan Atkinson. The name refers to John Blackadder (1615-1685).

John Blackadder was minister of Troqueer in Dumfriesshire. In the time of the Covenanters, he stood publicly against the appointment of bishops in the Church of Scotland. Because of this he was 'outed' from his parish in 1662. He settled in Edinburgh after that, but travelled extensively across southern Scotland, preaching at open-air conventicles. (Preaching in the open air was illegal at that time.) His reputation was high and his services as a preacher were in great demand.

Finally, in 1681, the government got their man and Blackadder was arrested for 'preaching in the fields'. He was sentenced to imprisonment on the Bass Rock. The conditions were appalling - food was poor, water scarce and ventilation almost non-existent. Nevertheless, John Blackadder wrote his memoirs while imprisoned. He died on the Bass in 1685. The Bass Rock lay within the then parish of North Berwick, so Blackadder was duly buried in the kirkyard of the second St Andrew's church, which was only about 20 years old at the time.

When the Free Church of Scotland was formed at the disruption of 1843, the dissenting party in North Berwick identified their struggle with the principles for which John Blackadder had lived and died. Accordingly, they named their church Blackadder Church. It retained its name after the unions of 1900 and 1929. In 1989, the parishes of St Andrew and Blackadder were united to form the present parish of St Andrew Blackadder, continuing the commemoration of John Blackadder's name.

Both the Bass Rock and Blackadder's grave lie within the present parish of St Andrew Blackadder.

Skip back to main navigation